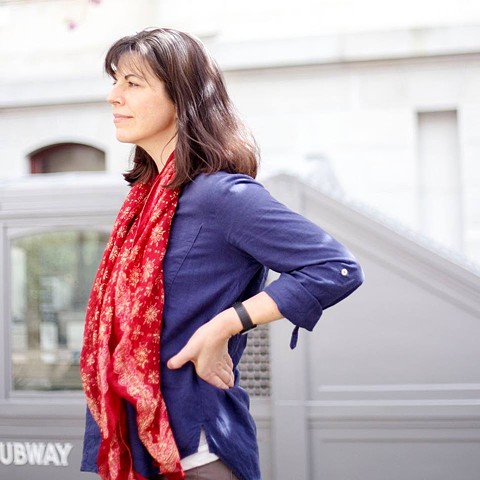 BIOGRAPHY Donna Backues has a BA in Studio Art and Graphic Design from Southern Illinois University, an MFA from The Pennsylvania Academy of the Fine Arts and an MA in Urban Studies & Community Arts, from Eastern University.

After working as a graphic designer for several years in the US, Donna moved to Indonesia in 1989 and lived for 18 years raising two children and working in grass roots development with her husband. Her surroundings inspired her to invest time in her own artwork as well as learning the Javanese textile art of batik.

During her last 10 years in Southeast Asia, she founded a village community health program and a community arts program. Her interest in indigenous art forms led to her co-founding a handicraft non-profit supporting local artisans in West Java as well as designing batik textiles and woven products for export. She also created illustrations, manuals, and teaching aids for development projects including materials used in relief efforts during the aftermath of the 2004 Asian Tsunami.

After returning to the US and finishing her MFA in 2010, Donna taught for the Village of Arts and Humanities, the Mural Arts Philadelphia and Fleisher Art Memorial. She has been awarded numerous residencies through the Philadelphia Art Museum’s Delphi Art Futures and Art Partners program, Spiral Q and Rutgers Camden Center for the Arts. In 2013 Donna won first prize in the American Batik Design Competition, in 2014 she was awarded the Art & Change Grant by the Leeway foundation and in 2017 she was awarded the NewCourtland Fellowship.

In 2018, Donna received an MA in Urban Studies with a Community Arts emphasis. Besides painting in her studio, exhibiting her art and teaching, Donna works at SEAMAAC, Inc. as the Coordinator of Community & Family Wellness serving the immigrant and refugee population in South Philadelphia. She has been able to incorporate her community arts training and experience in many of SEAMAAC's social work programs.

Four of Donna's paintings are in the Philadelphia Convention Center’s permanent collection. Her murals can be seen in Philadelphia, Camden NJ and in Leeds, England and her paintings have been collected and exhibited nationally and internationally in Europe, Southeast Asia, Australia and New Zealand.